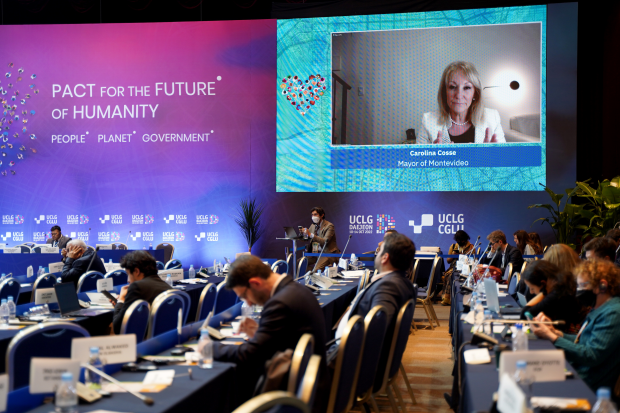 The 7th UCLG World Congress and Summit of Local and Regional Leaders closed on 14 October 2022 with the participation of more than 3,000 representatives from all over the world. The adoption of the Pact for the Future of Humanity was the most relevant outcome of the event held in Daejeon, Republic of Korea.

Built on the outcomes of the past UCLG Congress in Durban, South Africa, in 2019, the Congress strengthened the dialogue between the local and regional governments constituency and the civil society organizations by creating a Town Hall process which have fed the three axes of the Pact for the Future (People, Planet and Government).

Civil society, academia, professionals, youth, older persons, grassroots women associations, among others, were part of the nearly three year-long process to prepare the Pact. UCLG also worked closely with intergovernmental organizations, such as the High Commissioner for Human Rights, the World Health Organization, the International Organization for Migration, the United Nations Office for Disaster Risk Reduction, and UN Women.

The Pact’s pledges and commitments were discussed during all the sessions in Daejeon, proposing care, feminism, accessibility, trust and ecological transition as key actionable areas to achieve it.

As the approved document states, for “a world that bridges local actions and global trends, bringing the territorial perspective to the global agendas. For a feminist world that cares and guarantees equal rights for us all. For world driven by well-informed, critical and empowered communities. For a world based on solidarity”.

A call for the global Feminist Municipal movement

The Daejeon Congress and Summit also witnessed an historic achievement of the global feminist municipal movement with the election of the first female mayor as President of UCLG. Carolina Cosse, Mayor of Montevideo since November 2020, and former Minister of Industry, Energy and Mining of Uruguay, will be accompanied by five other female mayors in the UCLG leadership, such as Ada Colau, Mayor of Barcelona; Anne Hidalgo, Mayor of Paris; Carola Gunnarson, Mayor of Sala; Asmaa Rhlalou, Mayor of Rabat; or Fatimetou Abdel Malick, the president of Nouackchott Region.

One of the commitments included in The Pact for the Future is a “call for a feminist leadership”, as well as “foster a feminist way of going about politics”.